You are here: Home / Projects

We work with clients from across all sectors to achieve project outcomes that exceed our clients’ expectations.

AMS and its staff have a proven track record of successfully working on a number of large-scale infrastructural projects throughout Ireland and the UK.

AMS have now completed the Stage (i)/(ii) and (iii) on-site archaeological works for the N69 Listowel Bypass. These works commenced in November 2018 and were completed in August 2019.

AMS are currently producing the Stage (iii) and (iv) excavation reports and undertaking post-excavation specialist analysis for this project. 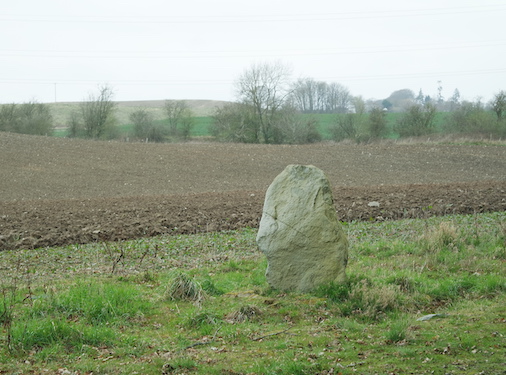 AMS completed the Cultural Heritage chapter of the Environmental Impact Assessment Report (EIAR) in November 2019 and currently act as heritage consultants for this project.

Archaeological discoveries on this scheme included two fulachtaí fia, habitation sites, a blacksmith’s forge, and a portion of the 18th-century Rathmore to Killarney turnpike road.

This short film showcases the forge and turnpike road excavations. The portion of a Turnpike road discovered during these excavations is believed to have been a section of ‘The Butter Road’ also known as the ‘Straight Road’ or the ‘Old Kerry Road’ which was built in 1748 to link Cork-Millstreet-Castleisland-Listowel, with a branch to Killarney. The forge was constructed as a direct response to the construction of the turnpike road.

These two excavations (Gortanahaneboy East 2&3) were excavated in advance of construction of the N72 Stagmount Bends Road Improvement Scheme, Co. Kerry by AMS for Kerry County Council and the TII.

For Heritage Week 2022, AMS have created a poster and StoryMap showcasing the archaeological discoveries that were made during excavations for the N72 Brackaharagh Road Improvement Scheme, located between Rathmore and Barraduff in County Kerry.

Or visit our StoryMap.

Other key AMS Infrastructure Projects include:

AMS is currently involved in several water and utilities projects throughout Ireland and the UK. We are contracted as Project Archaeologists for all flood relief schemes in Co. Cork through the Office of Public Works. We have written numerous archaeological assessments for waste water treatment plants, water pipeline rehabilitation schemes and sewage schemes. We have also undertaken the role of Archaeological Contractor for many of these schemes providing archaeological testing, monitoring and excavation services.

Clients: Jacobs and Farrans on behalf of Irish Water 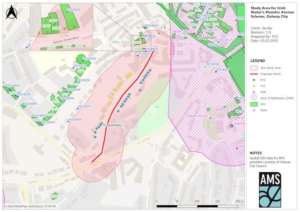 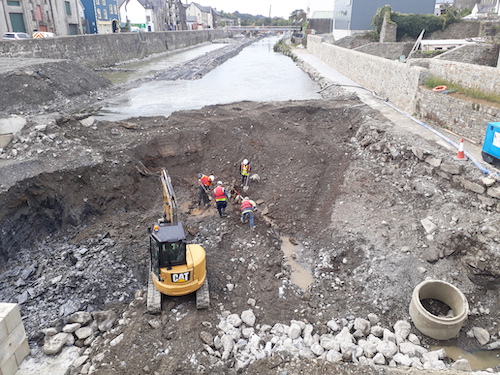 In 2017, AMS were appointed by the OPW as their Project Archaeologist for all flood relief schemes (FRS) in Co. Cork, which includes:

The first of these projects that we managed was the Bandon FRS, a €16 million FRS being advanced by the OPW in partnership with Cork County Council for Bandon Town.

AMS was engaged by RPS on behalf of Irish Water to carry out a cultural heritage assessment of the proposed Tuam Regional Water Supply Scheme Extensions in Co. Galway.

The study, which involved desktop research and fieldwork, considered the potential impact of the proposed scheme extension on archaeological and architectural heritage, and made recommendations to ensure compliance with National Monuments legislation.

We were further engaged to undertake a similar assessment of the Belturbet Water Supply Scheme.

Other key AMS Water and Utilities Projects include:

AMS is currently providing archaeological services for a number of windfarm projects in Ireland and the UK. Our services have included producing management plans, undertaking architectural surveys, archaeological investigations and post excavation services.

AMS have completed the on-site monitoring and archaeological excavation works at Rathnacally Wind Farm, Co. Cork. These works commenced in October 2017 and were completed in April 2018. AMS have produced the preliminary and final excavation reports and undertaken post-excavation specialist analysis for this project. 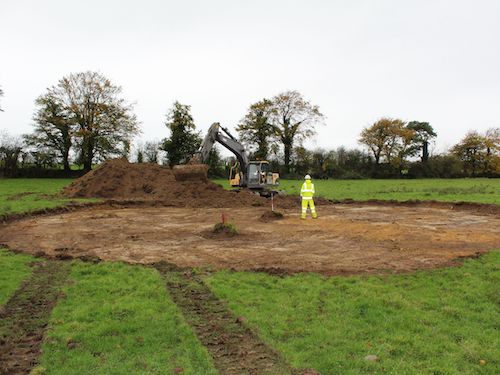 Galway Wind Park is Ireland’s largest wind farm development, comprising 58 turbines and covering an area of over 40km2 with the capacity to power 140,000 homes.

AMS were retained by the construction contractor, Roadbridge, to produce an archaeological management plan for the development, including mechanisms for the preservation of archaeological monuments.

We also carried out folklore studies within the community, along with public outreach and dissemination initiatives. These included: talks, school visits and publications.

On the basis of a portion of this work, an article was published in Archaeology Ireland examining the form and function of some concealed poteen stills identified during the fieldwork. We also developed a proposal for the conservation of some of the vernacular buildings.

AMS undertook the archaeological monitoring and test excavations for the Meenwaun Wind Farm outside Banagher in County Offaly on behalf of Roadbridge.

A number of archaeological features were revealed and excavated, and a Neolithic stone axe was recovered. This axe turned out to be a fascinating object with a long history. It probably broke during use, and was then passed down through the generations until finally being deposited at the edge of a small stream or lake edge.

It is intended to publish an article about this unusual find in Archaeology Ireland in the near future.

Other key AMS Energy-Sector Projects include:

AMS is providing a range of archaeological services to this sector. Our experience includes projects like the New Children’s Hospital in Dublin (currently the largest state-sponsored urban development in the country), the Curragh Racecourse redevelopment in Kildare, as well as numerous Data-Centre Developments and Pharmaceutical Projects.

This project is within the grounds of the existing St James’s Hospital in Dublin. The hospital under development is of national strategic importance and aims to deliver a world-class facility to care for sick children and young people from all over Ireland.

With a total construction value of c.€1.6 billion, this is one of the largest urban developments to take place in Dublin in recent years, measuring 4.86ha in total with the entire site subject to disturbance and/or excavation. 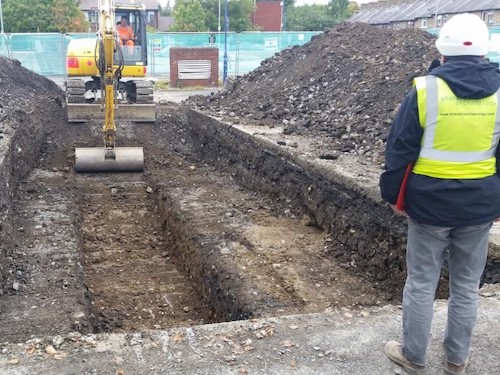 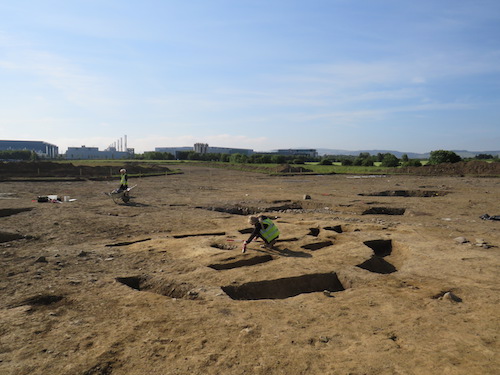 AMS have completed the on-site works for the redevelopment at the Curragh Racecourse, Co. Kildare. These works commenced in February 2017 and were completed in November 2017.

They included archaeological testing (two phases), monitoring and excavation of a number of archaeological features identified during testing in the area of the proposed new wastewater treatment plant, including an Iron Age ring-ditch (a prehistoric burial site). 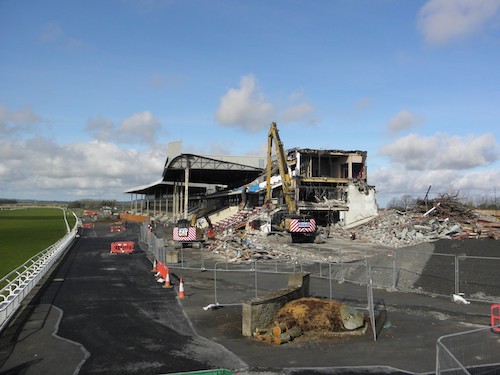 Other key AMS Commercial and Industrial Projects include:

AMS is currently involved in a number of exciting Urban Renewal projects including the Kilkenny Abbey Quarter Development and the Thurles Town Centre Integrated Renewal Strategy Masterplan. We have also provided Consultant Archaeologist services to Dublin City Council for the Kilmainham Mills Conservation Project and the proposed White-Water Rafting Facility at George’s Dock.

AMS are the Project Archaeologists overseeing the archaeological aspects of the Kilkenny Abbey Quarter Development project on behalf of Kilkenny County Council.

This is a planned redevelopment of 8.25ha in the centre of Kilkenny City on the site of the former Diageo or Smithwick’s Brewery. 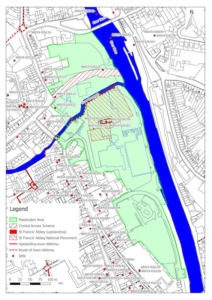