You are here: Home / About AMS / News

Archaeological Find at The Strand, Athlone

Westmeath County Council and the Office of Public Works are progressing the Athlone Flood Alleviation Scheme on the Strand, Athlone, where works have recently uncovered the possible remains of the town’s seventeenth-century defences.

Athlone was a strategically important crossing point on the River Shannon and was first walled in 1251. These walls were repaired and rebuilt in the late sixteenth and early seventeenth century when Athlone became the base of the English government for Connaught. Both the west and east parts of Athlone were walled, with the eastern walled area enclosing 14 acres. Substantial additions were made in the middle of the seventeenth century, including bastions. Further modifications to the town defences were made at the end of the seventeenth century. Athlone’s defensive walls and its castle played a significant part in the Siege of Athlone in June 1691 as the forces of King William attacked the Irish Jacobite defenders across the River Shannon.

Part of these town defences included a bastion which projected into the River Shannon on what is now The Strand. The remains of this bastion appear to have been substantially demolished for the Shannon Navigation works in the 1840s, when The Strand was created as a street along the east bank of the River Shannon. Now, construction works for the Athlone Flood Alleviation Scheme have uncovered the remains of walls that may have been part of this bastion. Further archaeological assessments will be carried out on The Strand under Ministerial Consent to determine this and in the interim Westmeath County Council in conjunction with the OPW are reopening The Strand between its junction with Griffith Street and Friary Lane for pedestrian use only. 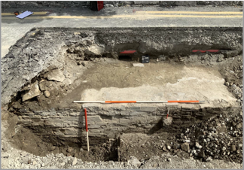 Interview and article in the @businessposthq about AMS 28 November 2021—

These accreditations confirm that our systems and procedures are formalised and standardised to an internationally recognised standard. Obtaining these accreditations also demonstrates our ongoing commitment to continual improvement in the areas of customer service, health and safety, and the environment.

Since the company’s founding in 2011, our mission has been to excel in terms of the quality of the service we deliver to our clients. Our Quality Management System (QMS) forms the bedrock of our operations. The success of our quality systems, which are designed to ensure we deliver best practice, is recognised by our ISO accreditation.

As part of our commitment to quality, AMS is also actively engaged in the development of best practice guidance and standards in the delivery of archaeological services. Standards and guidance that we have recently prepared or are currently working on include:

At AMS, health and safety are a number one priority. We work closely with our clients and their health and safety teams to ensure that the projects we manage are always carried out in accordance with health and safety legislation, regulations, and best practice. We also prepare site-specific health and safety risk assessments and plans for all major projects for use by our own staff and, in our capacity as Project Archaeologists, for any contractors we are overseeing.

Environmental awareness and sustainability are key components of everything we do at AMS and this is demonstrated at all our workplaces.

We constantly aim to reduce our carbon footprint and to improve our sustainability by:

For over twenty years, Kilkenny Archaeology has built a strong reputation as a quality provider of archaeological services to the city and county it is named for. AMS and Kilkenny Archaeology share similar values, with highly experienced and passionate people at the core of their organisations.

The company will trade as AMS Ltd moving forward.

Existing clients of Kilkenny Archaeology will benefit from access to the wider range of professional services offered by AMS. Details at: https://www.ams-consultancy.com

Cóilín Ó Drisceoil, managing director of Kilkenny Archaeology, comments: “Over twenty years ago myself and my late wife Emma set up Kilkenny Archaeology with the main aim of providing archaeological services that enriched our understanding of this wonderful city and county’s past. Over the past two decades the company we founded has been lucky enough to have been able to work on some of the extraordinary archaeological heritage that we are surrounded by. As I move on to an exciting new chapter with the National Monuments Service, I’m delighted my clients’ needs will continue to be met by Archaeological Management Solutions.”

Ed Danaher, managing director of Archaeological Management Solutions, comments: “I’m thrilled to integrate and continue the outstanding archaeological offerings Cóilín and his team have built over the past two decades into AMS. I’m looking forward to building on the strengths of Kilkenny Archaeology with the full range of services that AMS has to offer clients.”

AMS was founded in 2011 to manage the archaeological components of developments on behalf of government agencies. Services expanded to include archaeological excavations across numerous road projects throughout UK and Ireland from project inception through planning, procurement, contractual operations to close out. AMS has developed a reputation as the ‘go-to’ company in Ireland for the delivery of quality, value-for-money cultural heritage services. It also has a strong community outreach focus, including school visits and site open days, as well as a dedicated YouTube channel. Many of its staff regularly produce academic articles, as well as presenting at professional and academic conferences and seminars. AMS has recently been certified by the NSAI for ISO 9001 Quality Management, ISO 45001 Occupational Health & Safety Management and ISO 14001 Environmental Management, further evidence of the company’s quality focus.

Archaeologists to Carve a Replica of Pagan Idol

Work on the replica will start at 10am and continue throughout the day.

Media are invited to attend.

The Excavation Director, Dr Eve Campbell, along with ancient wood-working specialist Cathy Moore and other specialists will be on site and available for interview.

The park is open to the public for the normal admission fee and visitors will be able to watch progress. To be sure of admission, members of the public should book ahead through the Craggaunowen website https://www.craggaunowen.ie/

The Gortnacrannagh Idol is a 2.5m long oak carving over 1600 years old, recently found on an excavation in Co. Roscommon. The discovery of the idol was widely reported in newspapers (e.g. https://www.irishexaminer.com/news/arid-40358522.html) and

According to Dr Campbell, the archaeologist who directed the excavation on which it was found,
“The Gortnacrannagh Idol was carved just over 100 years before St Patrick came to Ireland, and is likely to be the image of a pagan deity. Our ancestors saw wetlands as mystical places where they could connect with their gods and the Otherworld. The discovery of animal bone alongside a ritual dagger suggests that animal sacrifice was carried out at the site and the idol is likely to have been part of these ceremonies.”

Irish archaeologists have unearthed a wooden pagan idol in the west of Ireland from the pre-Christian era.

This rare artefact, made over 1600 years ago, was retrieved from a bog in the townland of Gortnacrannagh, 6km northeast of the prehistoric royal site of Rathcroghan, County Roscommon. The wooden carving was discovered by a team from Archaeological Management Solutions (AMS) working in advance of the N5 Ballaghaderreen to Scramoge Road Project, funded by the Government of Ireland, administered by Transport Infrastructure Ireland (TII) through Roscommon County Council.

The idol was made in the Iron Age from a split oak trunk. It has a small human-shaped head at one end and a series of horizontal notches carved along its body. Only a dozen such idols are known from Ireland. At over two-and-a-half metres long, the Gortnacrannagh Idol is the largest found here to date.

AMS archaeologist Dr Eve Campbell, who directed the excavation of the site, commented: “The Gortnacrannagh Idol was carved just over 100 years before St Patrick came to Ireland; it is likely to be the image of a pagan deity. Our ancestors saw wetlands as mystical places where they could connect with their gods and the Otherworld. The discovery of animal bone alongside a ritual dagger suggests that animal sacrifice was carried out at the site and the idol is likely to have been part of these ceremonies.”

Wooden idols are known from bogs across northern Europe where waterlogged conditions allow for the preservation of ancient wood. The Gortnacrannagh Idol is currently in University College Dublin, where conservator Susannah Kelly is undertaking a three-year process to preserve the ancient object. Once conserved, the idol will be given into the care of the National Museum of Ireland.

Wood Specialist, Cathy Moore commented: “The lower ends of several figures were also worked to a point suggesting that they may once have stood upright. Their meaning is open to interpretation, but they may have marked special places in the landscape, have represented particular individuals or deities or perhaps have functioned as wooden bog bodies, sacrificed in lieu of humans.”

Dr Ros Ó Maoldúin of AMS commented: “Since the Gortnacrannagh Idol is such a unique and significant find, we are making a replica to help us understand the idol better and appreciate how it was made. It will be possible for people to see this in action at the Craggaunowen Archaeology Park in Co. Clare during the last weekend of August.”

The replica idol will be made by AMS staff in collaboration with members of the UCC Pallasboy Project and the UCD Centre for Experimental Archaeology and Material Culture. The replica will then go on display at the Rathcroghan Centre in Tulsk, Co. Roscommon.

The find at Gortnacrannagh will have no impact on the progress of the N5 Ballaghaderreen to Scramoge Road Project. Analysis of the artefact and the site it was found in are ongoing, and the results of the excavation will be published in a book to be produced by TII.

Roscommon County Council Resident Archaeologist Deirdre McCarthy commented: “Road projects such as the N5 provide a significant opportunity for the investigation of our archaeological heritage. Gortnacrannagh is an excellent example. Were it not for the road, we would never have known about this extraordinary site.”

Significant archaeological discovery made in Athlone

Can you dig it? Kilkenny Archaeology acquired by Clare-based company

Irish archaeologists have unearthed an eight-foot tall pagan idol from a bog in the west of Ireland.

Unearthed idol may have been a pagan deity, researchers say, and could hold clues to Ireland’s past: