We offer a number of specialised services including geophysical surveys, GIS/mapping, LiDAR and historical research. To download a brochure, simply click on the relevant link below: 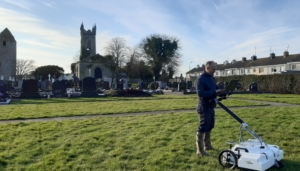 GPR can be used to map underlying foundations, structural remains and burials.

The technique involves transmitting a continuous electromagnetic pulse or wave of energy into the ground and recording reflections of that energy following its interaction with the objects and layers below the surface. The strength of reflections recorded is a function of 2-way travel time (the elapsed time for the energy wave to travel from the GPR to reflector and back to the surface) and is proportional to the conductive and dielectric properties of the layers and objects below the surface.

The system can be used manually in areas where access is limited, for example at the interior of existing buildings, and in combination with precision GPS or total station and quad bike for investigating larger urban/agricultural sites.

Examples of successful site usage include: